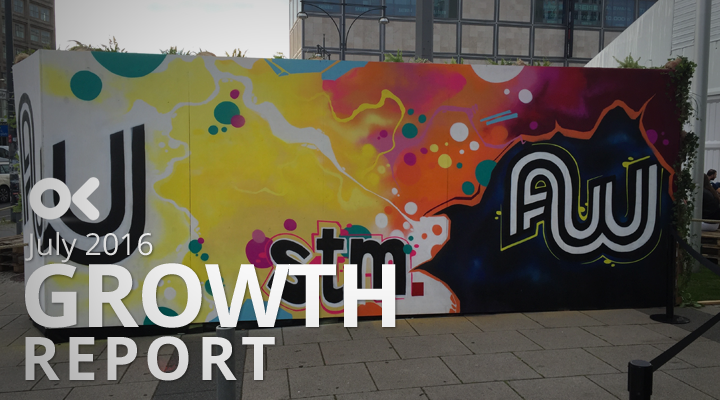 This is my thirteenth growth report on OliverKenyon.com. I use these reports to share my progress updates from both a business and a personal point of view. You can view my previous reports here.

What I Have Done in July

I hate saying it every month, but that was hands down one of the busiest and best months of my life!

I’ll go into detail below about everything that happened in the month of July, but to quickly summarise, I visited lots of new countries, bought my first house, went on holiday, and completely shifted my businesses.

The majority of this wrap-up will be mentioning our amazing trip through Europe to Berlin. We attended Affiliate World Europe, but we didn’t just attend the event, we also threw our first ever meet-up and party.

Not only that, but the day I returned from Berlin, I also picked up the keys to our new home…..finally!

There are lots to cover in this month’s wrap-up but I’m going to start with the important stuff.

Some of you have already guessed or asked me, but I’d like to clear this up on the blog officially.

Andy and I have had to take a step back from the Lovecars project.

To cut a long story short, we’re still fully behind the vision and project; however, we’re not going to be participating in a managerial role for the company in the short-term future.

Although we’re still shareholders in the company, it made logical sense for us to hand back our directorship due to our other commitments.

We both currently manage Landing Page Guys alongside our own businesses and new startup “Project P”. So with a heavy heart, we had to make a decision on where our time was best spent, and for us right now, it’s on our new startup.

Unfortunately, we’re still about a month away from announcing more details on the new venture, but I hope to be able to share it with you VERY soon on the blog.

Therefore, June’s growth report was the last time I’ll be reporting about Lovecars on my blog for the foreseeable future. Let’s hope next month I can replace it with “Project P”.

We both wish every one of the Lovecars team all the best for the future.

Secondly, I’d like to announce that after a LOT of thought and planning, we’ve decided to merge all 3 FixForums communities into one. This was after a lot of discussions with mentors, friends and the team, as we feel it’s the best thing for the brand.

All the forums will be migrated over to AffiliateFix, thus building one huge affiliate marketing community.

We will also be releasing some new features, membership levels, and incredibly cool resource enhancements, alongside a fresh new look and feel to the platform.

Work is underway and we should be launching the new company name and forum very soon!

We are also actively looking to invest in other affiliate marketing platforms and software alongside expanding into events and more.

With only two weeks to plan the entire thing, Rohail (The Suitcase Marker) and I managed to throw the first ever AffiliateFix co-hosted event/party in Berlin.

You can read my Affiliate World Europe Berlin 2016 wrap-up post to get the full insight into the event, but we basically managed to connect over 400 AffiliateFix and Suitcase Marketer members together. 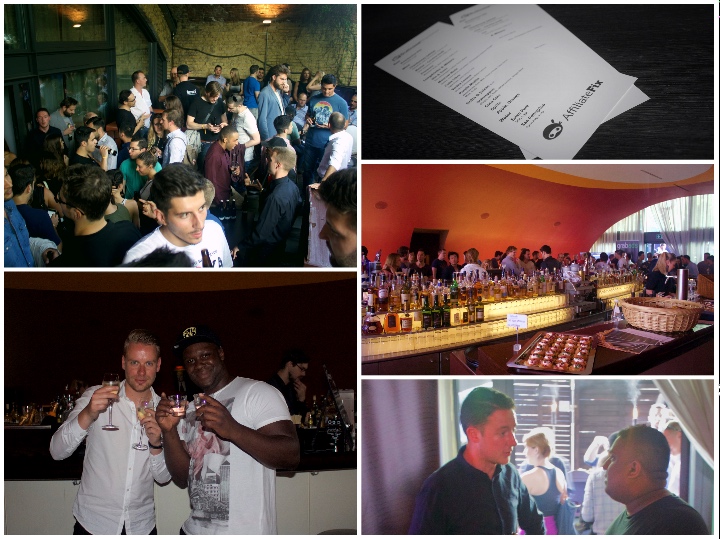 The event was a REAL eye-opener for myself and us as a company. We had loads of people approach us during and after the event saying it was one of the best parties of the conference and how we should be organising regular meet-ups!

This is something we 100% want to start doing and is one of the reasons we decided to reposition the FixForums brand and to focus solely on AffiliateFix and the affiliate marketing industry, as I’ve announced above.

The guys at STM seriously inspired me to take this company to the next level, so this is the start of me doing that.

The impact we made in Berlin was amazing. In fact, we had so many people – including members, networks and traffic sources – reach out to us and thank us for providing such a useful platform and place for affiliates to connect. 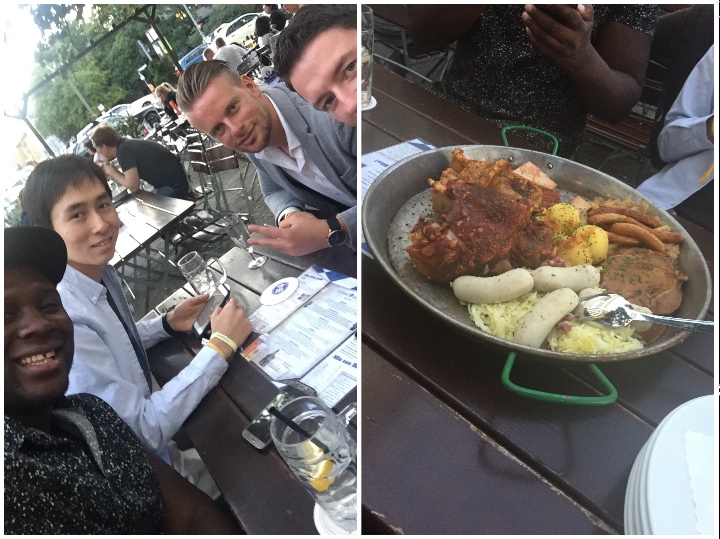 Speaking of Servando, he’s just posted one of the fastest growing threads on the forums in a long time. His follow-along all about how to make profitable campaigns on Zeropark has way over 4,000 views in just under 2 weeks! It’s well worth a read!

So it’s all change here also with this likely to be the last month’s report on “FixForums” as it is. Next month, we will hopefully be almost ready to reveal the big changes and will only report on AffiliateFix’s growth instead of all three forums.

To summarise so far:

Okay, for the last time as it is, let’s crunch some numbers:

July was also a very busy month for the team at Landing Page Guys.

Andy and I were obviously present at AWE in Berlin and had back-to-back meetings during both days of the conference.

It was amazing to finally meet so many of our clients that we hadn’t met previously due to them living across the world. 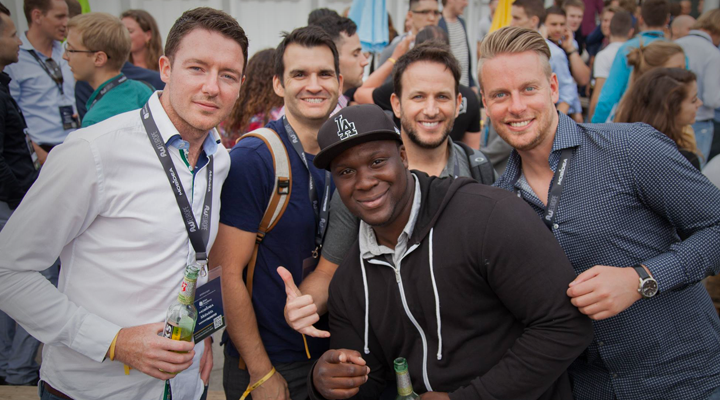 It was also by coincidence that the CEO of our development team was in Berlin with his wife for the weekend. It’s always a real pleasure to see our friend Kaspers, so we made sure we kept an evening free to catch up over dinner and have a few wines at Soho house.

Kaspers’ team is also developing our new startup “Project P”, so this was the perfect opportunity to strategise about how the project is going and at what stage we’re at with proceedings.

We met a LOT of great people in Berlin and did plenty of business. This past week has all been about chasing new leads and people whom we met with, in order to close out some new clients.

We had to put our new plugin on hold due to our July commitments; however, it should be released in the coming months and is 95% ready for beta testers.

Time to experience the plugin world I guess!

As July was SO BUSY for me, I failed to post my average 4 posts in a month; however, let’s take a look at what I did post:

The above articles actually grossed me the most page views I’ve ever had in a month on the blog, with lots of people very keen to follow up with what we got up to in Berlin and also find out more details about our event.

One of the nicest things about the event in Berlin was the amount of people who said they “recognised” me and regularly read or follow my blog.

It was a strange but rewarding feeling to have random people you’ve never met before thank you or ask to take a picture with you. Almost as weird was when I approached Neil Patel doing the same thing but from the other side.

Neil is someone I’ve looked up to for a long time, as he actually practises what he preaches. As you can see in my monthly reports, everything I write about or preach is due to the fact that I actually do them myself. Neil does exactly the same.

It was a real honour to not only witness him give a talk but to also spend some time speaking with him and have him say he’d heard of AffiliateFix and our projects.

My good friend and AffiliateFix member Kulwant took the following picture of us and put it on Facebook. It was amazing to see Kulwant’s reach as the picture received over 600 likes in a matter of minutes and my Facebook friend requests blew up! 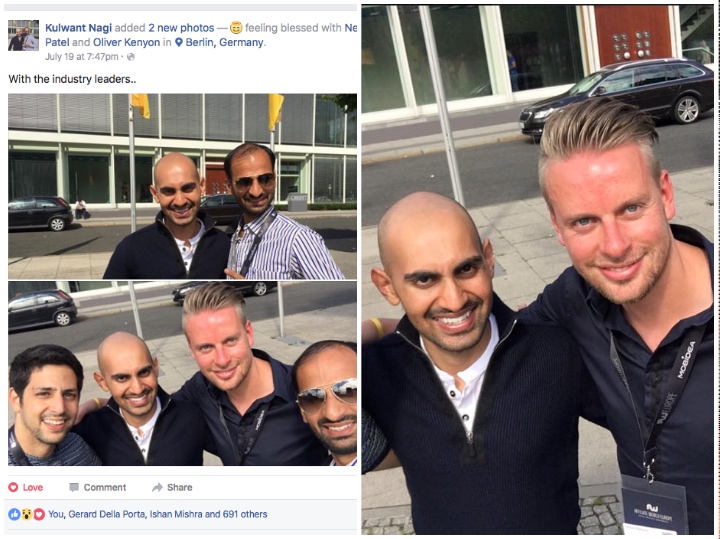 I’m hoping to reconnect with Neil and we’ve already been exchanging messages on Facebook. He could be a great mentor and consultant for me, so let’s see what happens.

August will be another crazy busy month for me due to the house move and also the big changes mentioned above, but I’m hoping I can knock out another 4 posts for you and get back on track with the blog.

Firstly, thank you to all my followers who messaged me and congratulated me on the announcement.

We’ve been on the property market for over a year, and having lost the last house we fell in love with, I never thought this day would come, but we picked up the keys and I LOVE it!

We’re not moved in yet, as you can see below, we’re having lots of work done on the property before we properly move, including what I keep describing as my “man cave”. Basically, I’ve worked my ass off and saved up for the past several years since leaving my fulltime chef job and the “man cave” is my reward!

For those of you who are interested (men), I’m converting the garage into what can only be described as a football heaven. It will feature a huge TV, surround sound, mini bar, wine fridge, cinema style seats and some incredible lighting to create the ultimate cave just in time for the new EPL season. 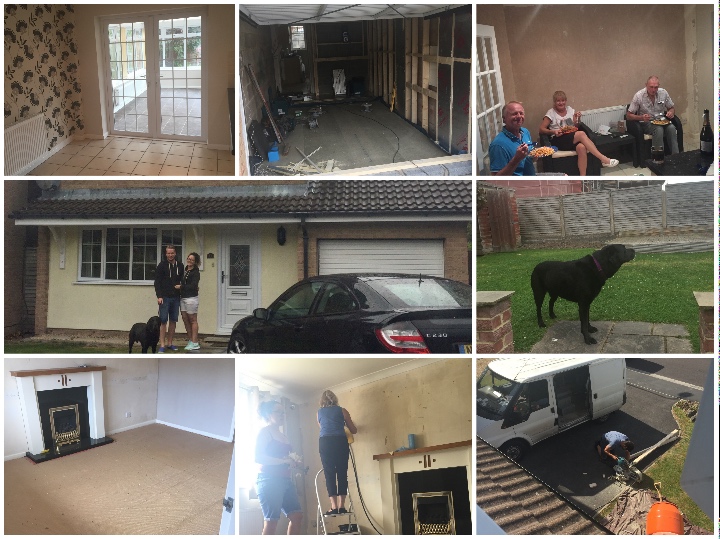 Josie and I made the conscious decision to holiday locally this year as we didn’t know when we were getting the keys and obviously a lot of money is tied up in the move, so we both enjoyed a lovely week in Wales in July with Dennis.

Our good friends Paul and Lucy joined us for the weekend, which was great, and the rest of the week featured lots of walking, drinking, sightseeing and adventures. 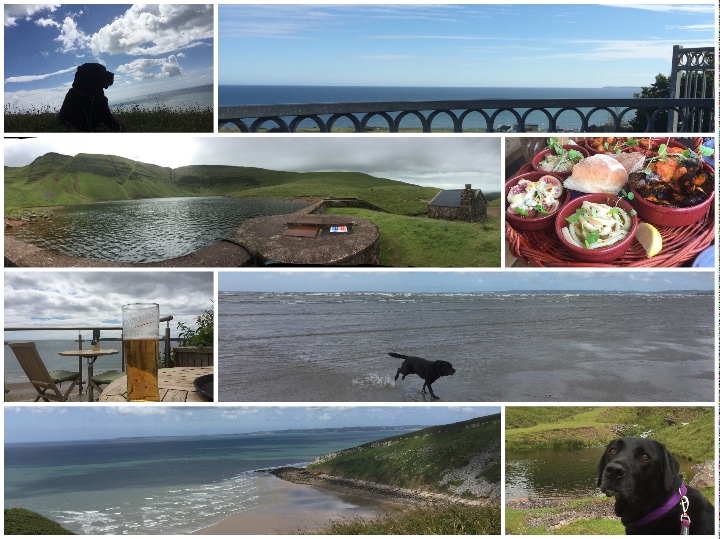 It was weird not going abroad for holiday, and I felt for Josie as I’ve been to lots of great places this year abroad with business, but it was all made worthwhile when we came back and exchanged on our home.

This last week was also a busy one as one of our friends got married, which was a great opportunity to congratulate the happy couple and to catch up with old friends. I also took some time to spend a fun day Sunday with my good mate Chris.

My fitness suffered in July as I’ve been so busy and away a lot, so therefore not training as much as I would have wanted with my PT Tom. I’ve also gone and put my back out pulling up carpet in the new house; however, I hope to put that right in August.

Wow, what a month and what a shift! It’s going to be awesome!

I hope you all followed things?

What did you do in July, guys?

Please comment below. It makes writing these posts so much more worthwhile.